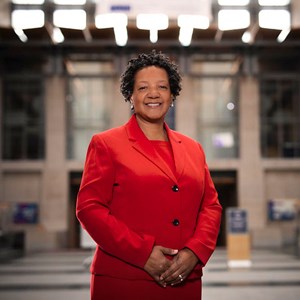 Gladys Brown Dutrieuille is now serving her second term as a Commissioner for the Public Utility Commission, after being nominated by Gov. Tom Wolf on Feb. 13, 2018, and unanimously confirmed by the Pennsylvania Senate on April 17, 2018. Her term expires April 1, 2023. She began her service at the PUC in 2013, and was first appointed as Chairman of the Commission in 2015. On April 15, 2019, Gov. Tom Wolf reappointed her as Chairman.

Chairman Dutrieuille has pledged to use the same fair and balanced approach in dealing with PUC issues that she used in her more than 22 years as an aide in the Pennsylvania Senate. She highlights the importance of the Commission’s work to educate consumers, enhance the safety and reliability of utility services and explore innovations for the future.

In August 2021, Chairman Dutrieuille was appointed to the Board of Directors for the National Association of Regulatory Utility Commissioners (NARUC), which oversees the association's general and financial functions and approves resolutions that serve as the association's policy. Additionally, she continues to serve on NARUC’s Critical Infrastructure Committee along with the recently-created Emergency Preparedness, Recovery and Resiliency Task Force, which was created last year to explore utility issues related to weather emergencies and evaluate the national utility response to COVID-19. And, in July 2021 she was nominated by NARUC to serve on a new joint Federal-State Task Force on Electric Transmission.

Prior to joining the PUC, Chairman Dutrieuille served as counsel to the Senate Democratic Leader where she worked on many of the major utility issues that have been considered by the General Assembly in the last two decades, including all of the major deregulation bills for telecommunications, electricity and natural gas; Act 201 of 2004, which added Chapter 14 to the Public Utility Code and changed the handling of consumer terminations and reconnections; Act 129 of 2008, which addressed energy efficiency and procurement; and Act 11 of 2012, which expanded use of the distribution system improvement charge.

Before her work with the Senate, Chairman Dutrieuille served as an assistant counsel for the Bureau of Professional and Occupational Affairs in the Pennsylvania Department of State and as a clerk for the late Honorable Paul A. Simmons, Judge for the U.S. District Court, Western District of Pennsylvania.

A native of Middletown, PA, Chairman Dutrieuille earned her bachelor’s and juris doctorate degrees from the University of Pittsburgh and is a member of the Pennsylvania Bar Association. She also is a member of the Dauphin County Bar Association and the James S. Bowman Inns of Court, the Keystone Bar Association, and serves on the Central Pennsylvania Food Bank Governance and Nominations Committees following three terms on that organization's Board of Directors. She is an active member at Bethel African Methodist Episcopal Church in Harrisburg. She also is an active member of the Epsilon Sigma Omega Chapter of Alpha Kappa Alpha Sorority Inc. and the Harrisburg Chapter of AABE (American Association of Blacks in Energy).

She and her husband, Steven, and daughter, Maya, reside in the Harrisburg area.