Until 1997, Pennsylvania had four area codes – 814 (northwest), 412 (Pittsburgh area), 717 (central) and 215 (Philadelphia). With the increased use of cell phones and consumers purchasing additional lines in their homes, the demand for additional telephone lines exploded. This demand put the four area codes in Pennsylvania in jeopardy.

Since then, five more were added from 1997 through 2000: 724 in greater Pittsburgh, 570 in Northeastern Pa., and 610, 484 and 267 in Southeastern Pa. In 2001, another code was activated in the greater Pittsburgh area (878). Over the succeeding years, conservation measures implemented by the Commission and the FCC delayed additional area exhaustions until 2013 when the 272 area code was added to portions of the state. 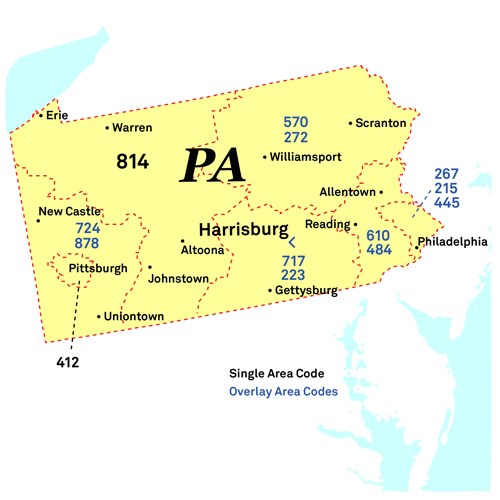 View area code maps by county and rate center. All maps are PDFs.

Mandatory thousands-block pooling began in June 2010. The industry, NANPA and the Commission monitor the area codes to determine if or when relief will be needed. Pooling uses telephone numbers more efficiently while ultimately delaying the need to add new area codes in the future.

Over the past several years, the PUC instituted several numbering conservation efforts to slow the proliferation of area codes in Pennsylvania, including pooling and NXX code and thousands-block reclamation.

There is currently only one area code in Northwest Pennsylvania: 814. The area code stretches from Erie to Johnstown to Breezewood, State College and Potter County.

814 Area Code Map
Outlines the counties and rate centers in the 814 region.

There are currently two area codes in northeast Pennsylvania: 570 and 272. The region covers Williamsport, Scranton, Wilkes-Barre and Monroe County.

There are two area codes in Central Pennsylvania: 717 and 223.

717/223 Overlay Fact Sheet – Information, key date and tips regarding the switch to mandatory 10-digit dialing in the 717/223 service area.

Pennsylvania currently has 13 area codes across the state due to the increased use of cell phones and consumers purchasing additional lines in their homes.

Neustar
The number pooling administrator for the pooling trials.

Area Code Locations
A list of locations for each area code in the US, Canada and some Caribbean Islands.

Homeowners and contractors must call 8-1-1 before starting any digging or excavation project.