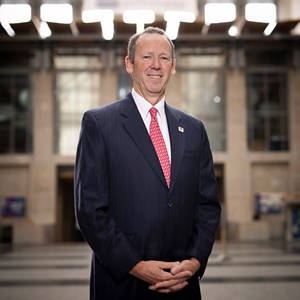 John F. Coleman Jr. has been a member of the Pennsylvania Public Utility Commission (PUC) leadership team since 2010, when he was first appointed Commissioner. During his tenure he was nominated by three different governors—Governors Edward G. Rendell, Tom Corbett and Tom Wolf. He served as Vice Chairman of the Commission from 2011 to 2015, and on Oct. 7, 2021, he returned to the role of Vice Chairman through 2022. His current term expires April 2022.

His commitment to public service also includes his current role as Chairman of the Gas Technology Institute Public Interest Advisory Committee. He is also a member of the Pennsylvania Energy Development Authority Board of Directors.

Vice Chairman Coleman is a certified Economic Development Professional with a strong background in business and finance, capital formation, community and economic development, and business startup and expansion. His professional experience, in addition to his many years of service to the PUC, has made him a valuable resource to the organization.

Vice Chairman Coleman is a graduate of Saint Francis University and the United States Chamber of Commerce Institute of Organizational Management at Notre Dame. He is a founding investor and the Corporate Treasurer of SilcoTek in Bellefonte, Pennsylvania.